Ten years after launching the Leaf, the world’s first popular EV of the 21st century — over 475,000 sales to date — Nissan launched the Ariya, the long-awaited electric SUV with ample autonomy. A newcomer set to go on sale in Canada in 2021.

Offered with front wheel drive or a new all-wheel drive system called e-4orce, the Ariya will be available in both configurations with a 63 or 87 kWh battery providing respectively 321 and 482 km of autonomy. 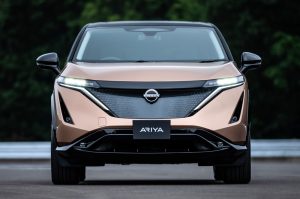 Like the Leaf, Ariya will have e-Pedal, which allows the driver to start, accelerate and decelerate using only the accelerator pedal. Nissan will also offer the next-generation ProPilot Assist 2.0 semi-autonomous driving system that uses driver attention monitoring to enable hands-off single-lane highway operation.

Nissan’s designers took advantage of the car’s new EV platform, which allows for a flat floor, and its compact climate control components to give the Ariya a very spacious. The lounge-like interior, featuring thin profile Zero Gravity seats, provides a welcoming and comfortable environment for drivers and passengers alike.

Unveiled in Yokohama, Japan, on July 15, Nissan Motor’s Chief Operating Officer Ashwani Gupta described the Ariya as ‘‘a key model in Nissan’s plan to roll out 10 new models in 20 months, demonstrates our commitment to meeting customer demand for crossovers with the most advanced electrified, automated and connected technologies.” 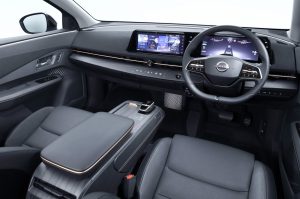 “The company expects sales of its EVs and e-Power electrified models to be more than 1-million units a year by the end of fiscal 2023. The Ariya will play a significant role in attaining that goal,” Gupta added.

Nissan also aims to introduce autonomous driving technologies in more than 20 models in 20 markets, and to have sold more than 1.5-million vehicles equipped with these systems in that same period.

The Nissan Ariya is scheduled to go on sale in Japan in mid-2021, followed by Canada, the U.S., Europe and China later in the year. Pricing in the U.S. should start at around $40,000.