The US group UPS, the foremost parcel carrier in the world is currently testing an autonomous-enabled Gaussin electric trailer and swap body mover (TSBM) in London.

With 125,000 vehicles in operation, including 10,300 alternative fuels and advanced technology vehicles, UPS has one of the largest private fleets in the world. It has set itself the goal of using clean energy vehicles for 25% of its road transport, that is over 30,000 vehicles by 2020.

Built in France, the Gaussin TSBM UPS is testing in London can move trailers, semi-trailers and containers in both manual and autonomous mode. 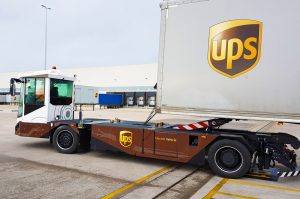 Gaussin EVs include an original battery-swap technology enabling the TSBM to remain in operation day and night, as the discharged battery pack is immediately replaced by a fully charged one. Additionally, the vehicle has numerous cameras, sensors and sophisticated algorithms to improve safety. These technologies should create efficiency and improve safety in UPS operations.

During the initial phase of the test at its London Hub, UPS will operate the vehicles with drivers in the cabs to evaluate vehicle operations and the efficiency they generate. Later this year, UPS will progress to the next phase of operation, initiating autonomous driving operations.

“These tests are part of a major UPS effort to integrate electric vehicles throughout our global network. Gaussin’s shifters will help cut our fuel costs and reduce emissions,” said Juan Perez, UPS chief information and engineering officer. “We’re also eager to test the shifters in autonomous driving mode. This is a great opportunity for us to evaluate technologies on our own property.”

For his Christophe Gaussin, Gaussin chief executive officer, considers this collaboration with UPS brought valuable insights to the engineers of his Héricourt-based company. “We are pleased to see the vehicle in live operations. Our TSBM will save maintenance and energy costs. Our unique battery swap system will allow continuous operations and will contribute to UPS’s operational efficiency and productivity increases.”