BMW has unveiled on the internet the 7th generation 5 Series sedan on May 26. With improvements in exterior and interior design, aerodynamics and technology, the return of a plug-in hybrid drive train on the 530e xDrive, and the introduction of a new 48v mild hybrid system on the 540i xDrive, this new generation of 5 Series continues to deliver cutting-edge technology and performance into its sixth decade of existence.

Over 600,000 units of the 5 Series cars have been sold worldwide since the market launch of the current model generation in October 2016. 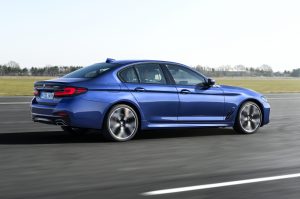 The most striking feature is the new BMW Kidney Grille design with resculpted headlamps. The new grille is taller and wider, reaching further down into the front bumper cover and is surrounded by a one-piece grille element. The vertical grille slats are more pronounced and extend further into the air flow.

While most exterior and interior dimensions remain unchanged, the length grows by 30 mm to offer a more sweeping profile. The aerodynamics of the new 5 Series sedans benefit from the carefully drawn lines, with the 530i xDrive sedan achieving a Cx as low as 0.27.

The interior of the 2021 5 Series Sedan is highlighted by the standard Live Cockpit Professional with iDrive 7, a 12.3” digital instrument display and a 12.3” digital central touchscreen controls display (up from previous 10.25”). Standard Navigation, Apple CarPlay Compatibility and Android Auto Compatibility are included. Dakota Leather is standard on all 5 Series models, as is the SensaTec Dashboard. Nappa Leather is an option on all models. All models feature standard Sports seats and a 40:20:40 split folding rear seat.

When the Driving Control switch and transmission are set to Sport, a new XtraBoost feature offers an additional 40 hp for up to 10 seconds when the throttle is depressed to the kickdown position. The combined power and torque of the new 530e xDrive sedans are 288 hp and 310 ft lb of torque, an increase of 40 hp over previous 530e models. 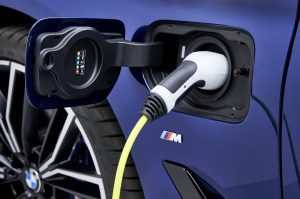 A 12 kWh lithium-ion battery module provides the storage capacity for electric only and performance-oriented driving. The range in electric mode has not been released yet by the manufacturer and hopefully it will be higher than the 31 kilometres range of its predecessor, which also used a 12 kWh battery.

The 530e xDrive sedan features Acoustic Protection for Pedestrians, which uses an exterior speaker system to generate an unmistakable sound created specifically for electrified BMWs operating in electric-only mode at speeds up to 30 km/h.

Like all of its predecessors since 1973, the new 5 Series will be produced primarily at the BMW plant in Dingolfing, Bavaria, which also delivers 7 Series and 8 Series models.

The new 5 Series sedan will also be built by production partner Magna Steyr in Graz, Austria, while a long-wheelbase version made exclusively for the Chinese market will be built by the joint venture BMW Brilliance Automotive’s Dadong plant in Shenyang.

First deliveries in Canada are expected in August 2020 while pricing and options information should be confirmed in the coming weeks.