Hyundai Motor began development of fuel cell electric vehicle (FCEV) technology over 20 years ago, with the establishment of a dedicated research team in 1998.

The first step towards whole vehicle development was the Project Mercury collaboration between Hyundai and United Technologies Corporation (UTC) a fuel cell company based in South Windsor, Connecticut. A number of vehicles were developed during the collaboration, with system improvements in powertrain performance and increasing range capabilities culminating in the final vehicle, Mercury II. This was based on the first-generation Tucson with an 80 kW fuel cell system, 337 km range and the ability to start from temperatures as low as -20oC. 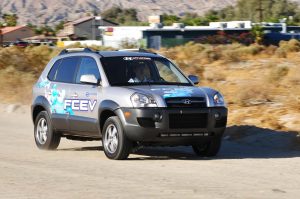 In 2000, Hyundai also launched the Polaris project in conjunction with the Korean Government’s G7 Project. The G7 Project was an initiative to help close the technological gap that existed between Korea and other advanced countries, specifically in the field of eco-innovation. The Polaris project saw Hyundai independently develop complete fuel cell vehicle systems based on the first-generation Santa Fe SUV (top picture). This led to several project vehicles such as Polaris II which showcased a Hyundai fuel cell system with an output of 80 kW and a range of 370 km.

At the same time as the Polaris II was in development, Hyundai produced its first fuel cell bus in 2005, with a 160 kW fuel cell system and an operating range of 380 km. As the sole automotive sponsor of the 2006 FIFA World Cup, as well as a fleet of conventionally fuelled vehicles, the Company also provided a fuel cell bus as official transport for the duration of the tournament. This was the first time a Hyundai bus was certified for use on European roads, with the process taking only four months from offering the vehicle to its arrival in Germany. 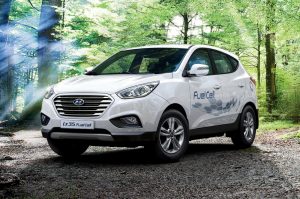 As well as fuel cell systems, Hyundai also began in-house electric vehicle research in the early 1990s. The two technologies became unified for the first time in the 2007 Tucson FCEV, which had a combined fuel cell and battery electric drivetrain output of 100 kW and a range of 370 km. Fuel cell bus development continued alongside passenger vehicles, with the 2009 second generation fuel cell bus offering a combined fuel cell system power of 200 kW and an operating range of 380 km.

The ix35 FCEV: start of the series production

2010 saw two milestones in the Company’s fuel cell technology development: the accumulative distance covered by all Hyundai fuel cell vehicles reached the 2,000,000 km mark and a new FCEV prototype was launched bearing the name ix35 used for the Tucson outside of North America and South Korea. This fuel cell vehicle was the first Hyundai to use high pressure 700 bar fuel storage, boosting range to 635 km from the 100 kW fuel cell drivetrain. 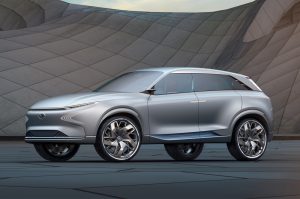 In 2014 Hyundai unveiled the Intrado concept at the Geneva Motor Show. This concept showcased a focus on usability and adaptability, using advanced materials such as high-strength steel and carbon fibre and new manufacturing and joining techniques that together have the potential to change the way cars are made. Intrado demonstrated a next-generation hydrogen fuel-cell powertrain with a hybrid Li-ion 36 kW battery, with a range of over 600 km.

By 2015, ix35 FCEV sales were taking place across the world, including 13 countries in Europe. In the UK, 17 customers (from private companies, car sharing organizations and government agencies) became the first to drive hydrogen fuel cell cars. Across the European continent, these fuel cell SUVs on the road covered more than 1.2 million km.

Hyundai’s ongoing commitment to fuel cell development was shown in 2017, with the FE (Future Eco) Fuel Cell concept that was shown at the Geneva Motor Show. The longer, lower and wider than the ix35 FCEV, the FE concept was shown as Hyundai’s Future Utility Vehicle (FUV) with a number of innovative vehicle technologies shown alongside its powertrain. These included integrated storage and charging space for an electric scooter which demonstrated how Hyundai Motor was starting to broaden the development of mobility solutions to match future lifestyles. The FE Fuel Cell concept featured new drivetrain technology including a fuel cell stack 20% lighter than that of the ix35 Fuel Cell, yet with an increased power density of 30% and a range of over 800 km.

Nexo: the next generation

The year 2018 was another landmark year for the Company’s fuel cell story, with the launch of Nexo, which is currently the only fuel cell SUV in the world. The design for Nexo clearly followed on from the FE FCEV concept, with many of the innovative technologies such as Lane Following Assist, Highway Driving Assist, Blind Spot View Monitor and Remote Smart Park Assist carried over from the concept to Hyundai’s 2nd commercially available hydrogen fuel cell vehicle. In comparison to the ix35 FCEV, Nexo is lighter and offers a 25% faster acceleration rate, increased torque and 40% more range. Its 135 kW powertrain and three reinforced carbon fibre/plastic fuel tanks allow it to deliver a range of 665 km. 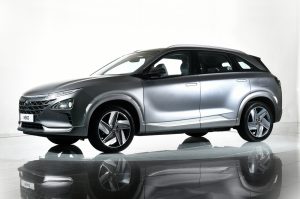 Following on from the launch of the Nexo, Hyundai Motor Group announced its long-term roadmap – ‘Fuel Cell Vision 2030’ – to reaffirm its commitment to accelerate the development of a hydrogen society by leveraging the group’s global leadership in fuel-cell technologies. Aligned with the roadmap, Hyundai Motor Group has pledged to drastically boost annual fuel-cell system production capacity to 700,000 units by 2030 and explore new business opportunities to supply fuel-cell systems to other transportation manufacturers of vehicles, drones, vessels, rolling stocks and forklifts. The demand for fuel-cell systems from sectors beyond transportation such as power generation and storage systems is also expected to emerge quickly.