EVs democratized thanks to the Ford Mustang Mach-E

Ford claims that the 2021 Mustang Mach-E will be as revolutionary as the Model T, which democratized the automobile in 1908, and the Mustang, which arrived half a century later to democratize sports cars. The Mach-E will democratize EVs!

Gone is the fear of insufficient range and the eccentricity often associated with all-electric vehicles. The Ford Mustang Mach-E will change consumers’ perceptions by focusing their attention on the pleasure of driving a vehicle reminiscent of the original pony car.

“Like the Mustang of 55 years ago, the Mach-E represents performance, fun, and freedom,” said Frenchman Fabrice Jund, head of Marketing of hybrid and electric vehicles at Ford Motor Company in Dearborn, Michigan, in an interview at the 2020 Montreal International Auto Show last January. 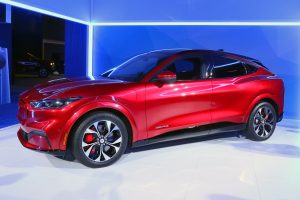 The Ford Mustang Mach-E 2021 will democratize VEs, says Fabrice Jund. He is in charge of Marketing of hybrid and electric vehicles at Ford Motor Company in Dearborn, Michigan.

“Performance means 0 to100 in less than four seconds with the GT version. The fun part is its versatility, with five seats, a spacious rear trunk, the “frunk” (contraction of “front trunk”), and the option of four-wheel drive. Finally, the two batteries, which ensure a significant range (325 and 475 km), provides the freedom to go far. It’s Mustang DNA injected into an electric vehicle.”

When EV and people connect

This electric SUV was not initially intended to reinvent the car’s DNA. Even Ford’s executive chairman, Bill Ford, opposed it, which he openly admitted when it was unveiled in Los Angeles last November.

“At first, it was developed only to comply with government rules,” says Jund. “But the market matured, and EVs came out of the shadows.” The arrival of Jim Hackett as CEO of the Ford Motor Company in May 2017 would also have contributed to the strategy change.

While it could simply have been called the Mach-E, Ford created a phenomenon surrounded by an aura of mythical identity out of a generic EV. “Because now, we need something that people can connect with, from a place of strength. And that’s the Mustang brand,” said Fabrice Jund.

This decision shocked aficionados, who expressed it vehemently on social media. It’s like in the early 2000s, when Porsche unveiled its first SUV, the Cayenne. Nevertheless, time has since proven the Stuttgart automaker right, by quadrupling its sales and profits. 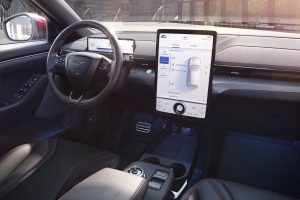 A transition that comes at the right time

“I think the market is ready for the democratization of EVs,” said Fabrice Jund, “People will realize that life is very easy with an EV: you start each morning with a range of 325 or 475 km, depending on the version [of Mach-E] you have. No more problems. No more going to the gas station.”

Another benefit is the image attached to the name. “When this vehicle is parked in your driveway, you won’t have to explain why you bought it. It speaks for itself. What sums it up the best is that it’s different, and it has the potential to become a Ford classic. We don’t reinvent the Mustang every day. It’s a fantastic experience!”