The 2021 Revero GTE will be Karma’s first full EV

Karma Automotive will launch its first full-electric sedan in the spring of 2021. Called Revero GTE it will become the fourth model in Karma’s Revero family complementing the base, GT and GTS plug-in hybrid models.

This new model will be built on the new E-Flex platform that will be used first on the 2020 Revero GT. The GTE is targeted to deliver 0-100 km/h acceleration in less than about 4 seconds and feature electronic torque vectoring. 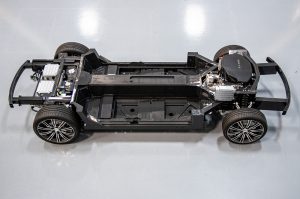 Using DC 150 kW fast charging, the GTE will reach 80% charge in under 30 minutes. Through AC charging at 11 kW, it will achieve a full charge overnight. Additional details on the hyper-range version as well as pricing of all versions will be available at a later date.

Like its predecessors, the Revero GTE will be assembled largely by hand at Karma’s manufacturing facility in Moreno Valley, Calif. Later in the fall of 2021, this new EV will be sold in China and Europe.