The 2020 Ford Escape Plug-In Hybrid has an estimated 61 km electric driving range and a combined fuel consumption rating of 2.3 Le per 100 km, based on the Government of Canada approved test methods.

To help compare vehicles that use electricity, like the Escape PHEV, to what traditional gas-powered vehicles consume, the Government of Canada uses a conversion factor to convert electrical consumption values into gasoline litres equivalent per 100 kilometres (Le/100 km).

“The all-new Escape plug-in has more power and more passenger space than the Fusion Energi plug-in, as well as up to four times the cargo volume behind its second-row seats,” said Hau Thai-Tang, Ford’s chief product development and purchasing officer. 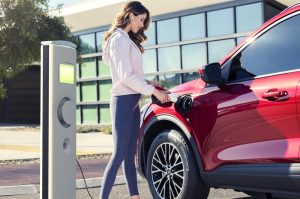 A liquid-cooled, 14.4-kWh lithium-ion battery is located below the second-row seats. Using a 110-volt Level 1 charger, the estimated time to fully charge the battery is 10 to 11 hours. Using a 240-volt Level 2 charger, charge time drops to roughly 3.5 hours.

The Escape PHEV starts at $37,549 MSRP and is available on the following series: SE, SEL and Titanium.