Toyota introduced the 2021 Venza SUV and Sienna minivan, two hybrid-only models in a web presentation hosted simultaneously on Vimeo, Facebook and YouTube on May 18. On Vimeo alone, 10,805 people viewed the presentation.

Referred to as ‘‘100% hybrids’’ these two newcomers are meant to be game changers in their respective segment. The Venza (top photo) is a midsize 5-passenger AWD SUV designed to compete with the Ford Edge, Nissan Murano, Hyundai Santa Fe, Chevrolet Blazer and Honda Passport in a growing segment. As for the Sienna, it will be the only minivan offering both a standard hybrid powertrain and optional AWD.

‘‘We are committed to offering electrified powertrains on 100% of our vehicle line-up worldwide and achieving 25% of our overall sales from electrified vehicles by 2025’’ said Bob Carter, Toyota Motor North America executive vice-president of Sales during this new product showcase presented on the internet.

Venza: a second generation introduced long after the first

The Venza was sold in Canada from 2009 to 2016. At the time, the segment it was competing in was much smaller. 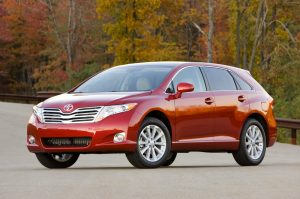 The new model due in Canadian dealerships this summer is a clone of the Japanese Toyota Harrier, which was introduced in mid-April in Toyota City. Like the Sienna, the Venza is built on a TNGA-K platform shared by several popular Toyota models like Camry, Avalon, RAV4 and Highlander.

According to the manufacturer, the Venza hybrid system adopts a newly developed lithium-ion battery and it is expected to have 5.9 L/100 km combined fuel consumption in LE base trim.

While the first generation Venza was built in the United States, at Toyota’s Georgetown, Ky., plant the new one will come from the Takaoka plant in Japan where the Harrier his built.

The fourth generation Sienna design was inspired by the iconic Shinkansen Japanese Bullet train. The headlights are mounted high and stretched around to the sides as if they are being shaped by the wind. 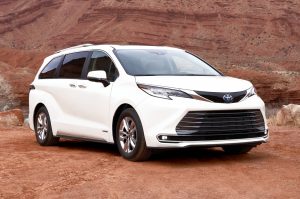 For this model, the Toyota Hybrid System II combines the 2.5-litre DOHC four-cylinder engine to two electric motors to deliver 243 total horsepower and an estimated 7.1 L/100 km combined fuel consumption, the latter setting a benchmark for the segment according to the manufacturer.

A new electronic on-demand all-wheel drive system will be offered on all version. Torque distribution will vary with conditions, from 100:0 in constant-speed driving to 20:80 on slippery surfaces. What’s more, all versions of the 2021 Sienna are rated to tow up to 1,587 kg.

In both cases, pricing was not revealed.