Ford has introduced its meanest and most daring incarnation of the original pony car with the electric Mustang Cobra Jet 1400.

Designed by Ford Performance this battery-powered prototype is purpose-built. It is projected to deliver over 1,400 horsepower (hence its name) and over 1,100 ft.-lbs. of instant torque to demonstrate the capabilities of an electric powertrain in one of the most demanding race environments. 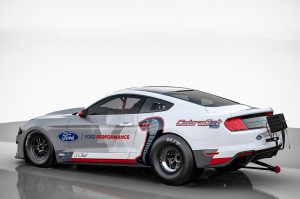 With the upcoming Mustang Mach-E electric SUV in the picture, this electric Mustang dragster ‘‘represents another opportunity to advance the pony car heritage and performance while simultaneously incorporating some advanced technology coming to Ford’s future powertrains’’, says the manufacturer.

More electrifying than a Camaro eCOPO

This prototype honours the original Cobra Jet that dominated drag strips from 1968 onwards. It also represents a powerful riposte to the Chevrolet Camaro eCOPO, the electric dragster unveiled by General Motors at the 2018 SEMA Show in Las Vegas.

Chevrolet partnered with Hancock and Lane Racing to develop this 2019 Camaro COPO-based concept car. It is driven by an electric motor providing the equivalent of over 700 horsepower and 600 lb-ft of torque, enough power to get quarter-mile times in the 9-second range, says GM.

Smoking tires on a track soon

Ford Performance continues to test the Cobra Jet 1400 ahead of its world debut later this year at a drag racing event (still unidentified) where fans and media alike will see the race car and what it’s capable of on the asphalt.

In the meantime, readers who want to know more about this green monster can catch a sneak peek starting this Sunday, April 26 by watching MotorTrend On Demand’s “Hard Cell” on the internet, a showcase of electric vehicles pushing innovation boundaries. 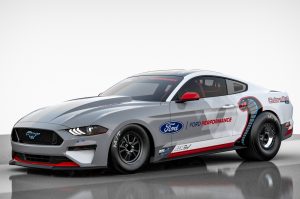