About 15 years before Toyota unveiled its Prius prototype at the 1995 Frankfurt Auto Show, the Milwaukee-based mower manufacturer, Briggs & Stratton, presented this intriguing 6-wheeler with hybrid powertrain. Built on a chassis borrowed from a Montréal-made Marathon C-360 electric truck, its design was produced by Brook Stevens and his son Kip. 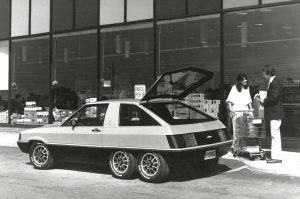 This hatchback coupe was powered by a 0.7 L B&S 42 two-cylinder motor, producing 18 hp, paired with a 6 kW (8 hp) Baldor electric motor powered by 12 lead-acid batteries totalling 454 kg— hence the necessity of having two axles at the rear to support such a mass.

Described as “practical and realistic” by the manufacturer, this prototype could travel in hybrid mode but also via electric propulsion over 50 to 100 km. The manufacturer gave it an average consumption close to 5.4 L/100 km, but its top speed was limited to less than 90 km/h. A project without a future, this unusual prototype was used above all to promote the B&S 42 engine, a novelty of the moment.