The XC40 Recharge P8, the first of five fully electric vehicles to be launched by Volvo over the next five years is scheduled to arrive at the Canadian retailers in the 4th quarter of 2020.

As a fully electric version of the compact XC40 SUV, the first Volvo to win the European Car of the Year award in 2018, the XC40 Recharge P8 is based on the Compact Modular Architecture (CMA), an advanced vehicle platform co­developed within the Geely Group. 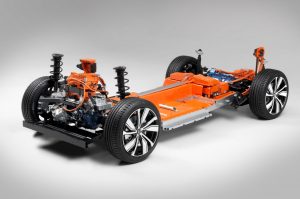 According to the manufacturer, the all-­wheel drive SUV will offer a range of over 400 km on a single charge. Its two 150 kW electric motors, one for the front wheels and one for the rear wheels are fed by a 78 kWh Li-ion battery and provide a total power output of 408 hp and 486 lb.pd of torque.

These twin motors deliver a 0-100 km/h acceleration of only 4.9 seconds. Moreover the battery charges to 80% of its capacity in 40 min using a fast ­charger system.

The placement of this battery under the centre of the vehicle means trunk space is not compromised. The minimum and maximum cargo volume are actually very close to a gasoline-powered XC40’s. However the lack of an internal combustion engine in the XC40 Recharge P8 frees up space for an additional 30-litre storage compartment or ‘frunk’ under the front hood.

The XC40 Recharge P8 will also be the first vehicle of the Swedish marque to get a brand new infotainment system powered by Google’s Android operating system. 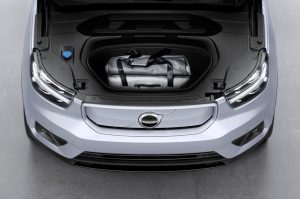 On March 5th, Volvo Cars inaugurated a brand new battery assembly line at its Belgian manufacturing plant in Ghent, where it will start building the XC40 Recharge P8, later this year.

The inauguration is the latest proof point for Volvo Cars’ electrification strategy. It aims to reduce its lifecycle carbon footprint per car by 40% between 2018 and 2025, as a first step towards its goal of becoming a climate ­neutral company by 2040.

Over the next five years, Volvo Cars will launch a fully electric car every year and it seeks to make all ­electric cars 50% of global sales by 2025, with the rest being hybrids. Recharge will be the name designating all chargeable Volvos with a fully electric or plug­in hybrid powertrain.

Canadian pricing of the XC40 Recharge P8 has not been announced yet. 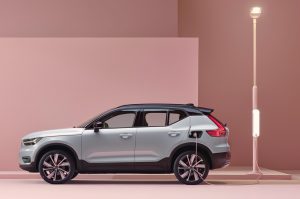