Beginning in late 2022, General Motors’s Spring Hill manufacturing facilities in Tennessee is expected to be powered by 100 percent solar energy, according to a press release issued on May 14.

Up to 100 megawatts of electricity generated by a solar farm under development by Origis Energy in Lowndes County, Mississippi, will be provided to this plant, GM’s largest in North America. According to the manufacturer, this equates to the electricity used by 18,000 American households annually. 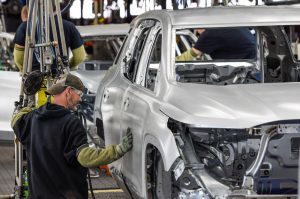 This project should increase GM’s use of renewable energy to more than 50 percent of its sourced electricity by 2023, moving the company closer to its goal of sourcing 100 percent of electricity from renewables in the U.S. by 2030 at its sites.

“Our commitment to renewable energy is part of our vision of a world with zero emissions,” said Dane Parker, GM chief sustainability officer. “We’re committed to using our scale and relationships to increase renewable energy demand and availability.”

The Spring Hill facility was built in the late 80s and started production of Saturn cars in 1990. It covers 2,100 acres, seven hundred of which are dedicated to farming, with an additional 100 acres dedicated to wildlife habitat.

The plant currently assembles several engines as well as three SUVs: the GMC Acadia and the Cadillac XT5 and XT6.